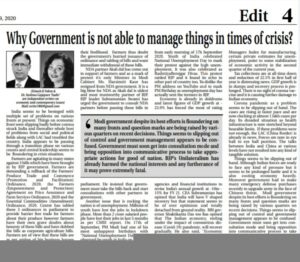 India seems to be besieged with multiple set of problems on various fronts at present. Things on economic front were slipping badly before corona struck India and thereafter whole host of problems from social and political fields along with LAC had troubled the country. India appears to be passing through a transition phase on various counts and central leadership seems to be  floundering in crisis situation.

Farmers are agitating in many states against 3 bills which have been brought in by BJP government. Farmers are demanding a rollback of the Farmers’ Produce Trade and Commerce (Promotion and Facilitation) Ordinance, 2020, the Farmers (Empowerment and Protection) Agreement on Price Assurance and Farm Services Ordinance, 2020 and the Essential Commodities (Amendment) Ordinance, 2020. Centre has tabled these 3 ordinances in parliament to provide barrier free trade for farmers about their produce however farmers have their own grave doubts about honesty of these bills and have dubbed the bills as corporate agriculture bills. Farmers are of view that these bills are as per wishes of big business houses who now wish to enter the agriculture field and deprive the poor farmers of their livelihood.  Farmers thus doubt the government’s hurried issuance of ordinance and tabling of bills and want immediate withdrawal of these bills.

NDA partner Akali dal has come out in support of farmers and as a mark of protest it’s only Minister in Modi Cabinet Ms. Harsimrit Kaur has resigned from NDA government. It is a big blow for NDA as Akali dal is oldest and most trustworthy partner of BJP. BJP leader Subramanian Swami has urged the government to consult NDA partners before passing these bills in parliament. He insisted that government must take the bills back and start consultations with other partners in government.

Another issue that is rocking the nation is of unemployment. Millions of youth have lost the jobs in lockdown phase. More than 2 crore salaried people have lost their jobs in last 5 months as per CMIE report. On 17th of September, PM Modi had one of his most unhappiest birthdays with “National Unemployment Day” being observed by youth in India on that day. Hashtag #NationalUnemploymentDay” started trending from early morning of 17h September 2020. Youth of India celebrated National Unemployment Day to mark their protest against the high unemployment.  It was also celebrated as Rashtriya Berojgar Divas. This protest rattled BJP and it found its echo in other part of country too. To dislike the PM address on YouTube and to mark PM Birthday as unemployment day has actually sent the tremors in BJP.

Economy is already in doldrums and latest figures of GDP growth at -23.9% has forced the most of rating agencies and financial institutions to revise India’s annual growth at -10to -15% for FY 21. CEA Subramanian has opined that India will have V shaped recovery but that statement seems to be of over optimism and totally detached from ground reality.  RBI governor Shaktikanta Das too has opined that The Indian economy, reeling under the impact of coronavirus disease (Covid-19) pandemic, will recover gradually. He also said, “Economic recovery is not fully entrenched; it will be gradual.” Governor further added that high-frequency indicators like agricultural activity, Purchasing Managers Index for manufacturing, certain private estimates for unemployment, point to some stabilization of economic activity in the second quarter of the current year.

Tax collections are at all-time down and reduction of 22.5% in first half of year is distressing news. GDP growth is in dumps and recovery process is prolonged. There is no sight of corona vaccine and it is causing further damage to Indian economy.

Corona pandemic as a problem seems to be slipping out of hand. The cases are rising at faster pace and are now clocking at almost 1 lakh cases per day. Its dreaded situation as health infrastructure is now stretched beyond bearable limits.

If these problems were not enough, the LAC (China Border) is already in news. Forces are now in eye ball to eye ball position. The talks between India and China at various levels have not resulted into any kind of tangible solution. Things seems to be slipping out of hand. Although Indian forces are ready to face any kind of pressure but it seems to be prolonged battle and it is also costing economy heavily. Moreover government had to make many emergency defense purchases recently to upgrade army in the face of Chinese threat.

Modi government despite its best efforts is floundering on many fronts and question marks are being raised by various quarters on recent decisions. Things seems to slipping out of control and government management appears to be confused. Government must soon get into consultation mode and bring opposition into communicative process to take appropriate actions for good of nation. BJP’s Unilateralism has already harmed the national interests and any furtherance of it may prove extremely fatal. 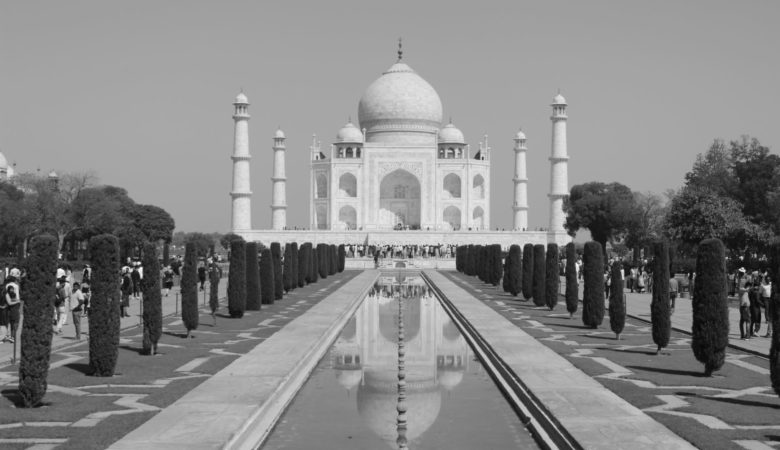 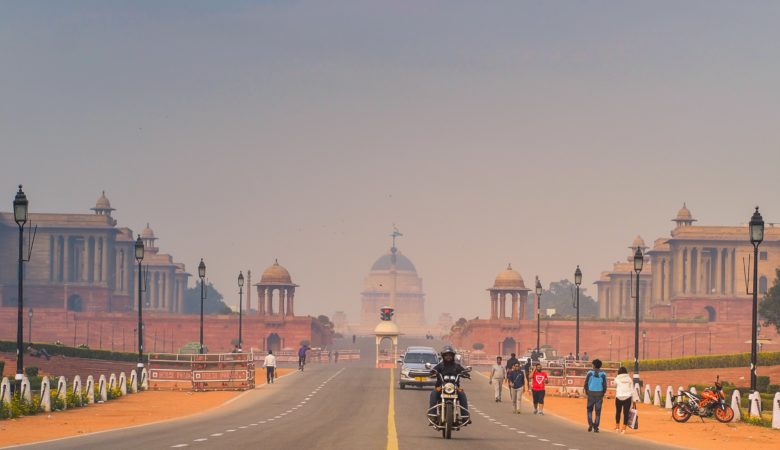